The boys got to celebrate Christmas early with their Mimi & Papa (hubby's parents) this year because of scheduling conflicts for the month of December (we've got hockey tournaments and they're going on a cruise. JEALOUS!!). They were given a Wii. And so begins my quest to beat the pants of my hubby in the bowling game on Wii Sports. 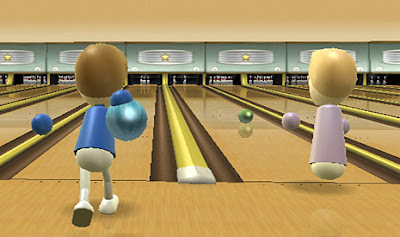 I have played so much in the few days we've had it that my shoulder and upper arm are sore from the constant bowling-like movement. I even found myself playing 10 frames by myself this morning when I got up with Sophia at 7:45 and everyone else was still sleeping.

They say the first step to recovery is acknowledging that you have a problem. So, my friends, I stand up and say to you, "I'm Jen, and I'm a Wii-aholic." 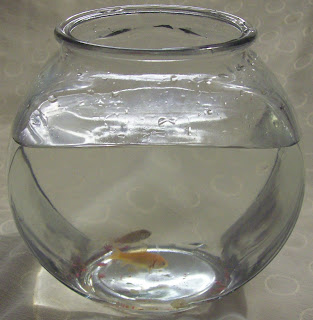 Meet the newest members of our household. Spike (the little silvery white fish) and George (the orange goldfish). 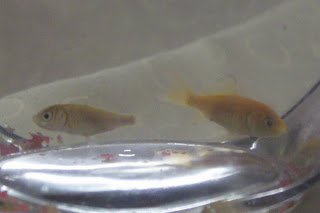 This recipe is from my trusy Better Homes & Gardens Cookbook. It's deeee-licious!

In a 3.5-4 qt crockpot place frozen meatballs and frozen mixed veggies. In a bowl, stir together tomatoes, gravy, water & basil; pour over meatballs and veggies.

...when you've got perfectly good cans? 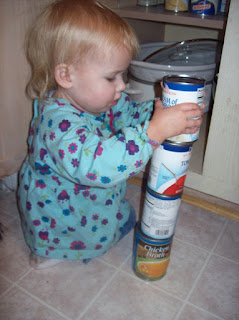 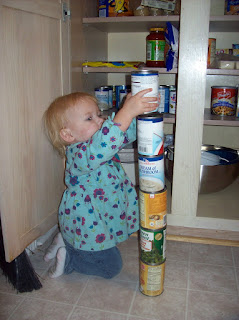 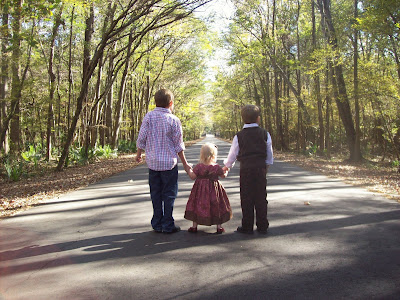 Today we took the kids to the Dorchester Historic Site and the Battery in downtown Charleston to take some Christmas pictures. It was cold so we didn't get to do as much as I'd hoped, but the ones we did get were great! 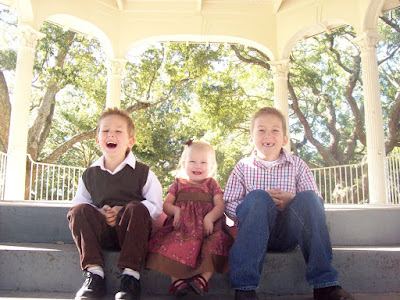 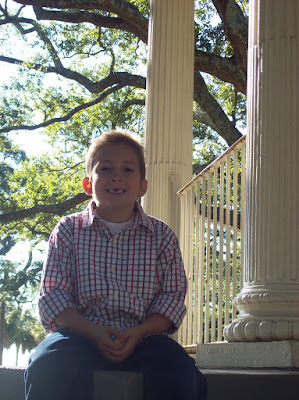 Since money's tight this year, I have decided to make the majority of the gifts for our family. I have been working on things for Sophia, my neice Gianna, my sisters, and my mother-in-law. And I roped the boys into being crafty this year too. A couple of weeks ago we went shopping at Michaels (by far one of my favorite places!) and bought some ceramic ornaments. The boys each picked out three to paint for their grandparents and their nana. Much to the boys' delight, today was they day they got to don their paintshirts and pull out their paintbrushes and get to work. 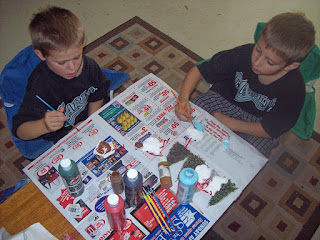 Noah was not happy I took this becuase he was still in his pj's. 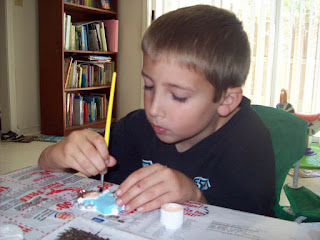 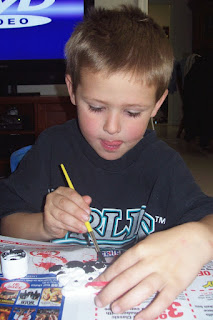 The finished products. Their grandparents and nana are going to love them! 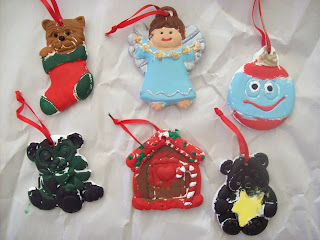 Remember a couple of months ago when this happened to me?

Well, guess what. It's happening again. Only now it's the hubby's card. We emailed yesterday to inform the bank that his card expires the end of the month and we still have not recieved his card. We got a response back today that went like this:

"Dear SSgt S,
We apologized for the inconvenience, Our records indicate that your debit card ending in **** was mail to the following address SURPRISE AZ . We have send another card Fed ex at no charge to you to the address on file CHARLESTON AFB SC on November 20, 2008, please let us know when you receive this card and what is the PIN you would like, once you receive this card your current card will be cancel.

SERIOUSLY? They sent it to Arizona, yet again, even though they say in the email that the address on file is in Charleston?! Come on you morons, get your act together!!!
Posted by Jen at 4:35 PM No comments:

An answer to prayer?

Money has been really tight for us ever since we PCSed from Arizona in February. Bobby was working a part time job helping out Webster College on the base at Luke, and he was also umpiring softball, which in Arizona is a year-round sport. When we moved, that extra income went out the window. My Etsy sales have not been so hot recently, but that wasn't really a steady source of income for us anyway. We have been praying for months about what we can do, and everything we try turns up short. We've had Bobby's truck up for sale for almost 6 months now, but with the shaky economy, we are having trouble selling. I was starting to feel hopeless.

But yesterday while Bobby was at PT in the gym on base, he was chatting with another SSgt who was working out next to him, and they were talking about their kids and such. She mentioned that she was a single mom of two, and that she was really unhappy with their current daycare. She had to drive them 45 minutes to the center, then 45 minutes back to the base, and then do the same drive again after work. She was paying quite a bit of money for them to be in that daycare, on top of all the gas she was using getting back & forth. Bobby mentioned that I'd done babysitting at a few of our previous bases, and that he'd talk to me and get back with her.

He propositioned me last night with the idea of babysitting again. I was hesitant because I love having the freedom of being able to go run errands or go shopping during the day while the boys are in school and most people are at work (I hate crowds). But then I realized that maybe this was our answer. God always provides, and sometimes it comes in the least likely or inconvenient forms, but we have to trust that it will work out. We can't be picky and say "No, God, I don't think that's good enough. What else you got?" So I am willing to take one for the team, so to speak, and try to help out my family in our struggle. The extra income will be such a relief on our minds and bank account.

We are still in the discussion phase at this point, but the more I think about it, the more I think it is the right thing to do. Please pray that we will recognize God's direction in this!
Posted by Jen at 10:03 AM 2 comments:

Preheat oven to 350*. In a bowl, combine all the herbs, salt & pepper. Remove silver skin from roast. Lightly brush pork roast with mustard on all sides. Press herbs on roast, and place in a roasting pan. Roast pork about 1 hour 15 minutes, or until meat thermometer reaches 150% in the thickest part of the raost. Wait 15 minutes before slicing meat.
Posted by Jen at 7:49 PM No comments:

When it's 30-some degrees outside, there's no better way to start the day. 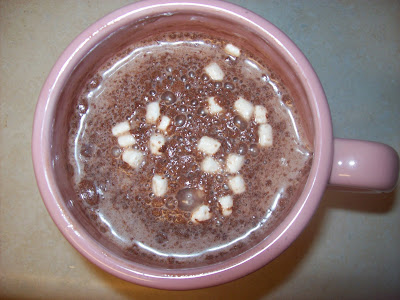 I love the beach.

Yes, it's November. But who says you can't enjoy the beach in the fall? 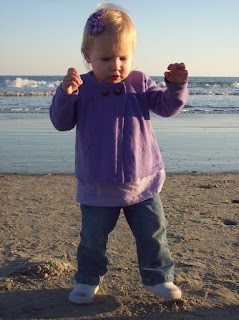 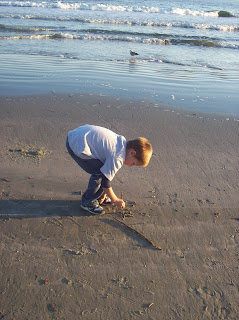 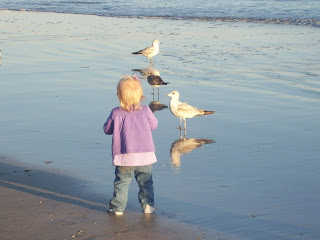 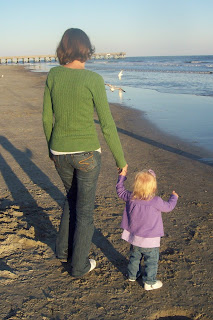 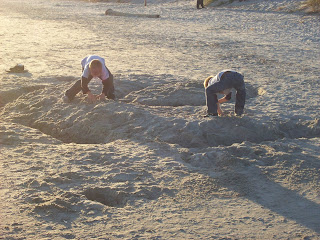 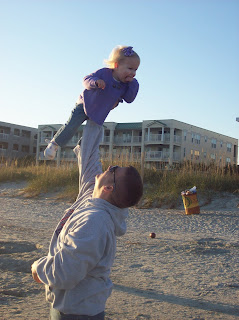 Stir in salsa; bring to a boil. Remove from heat; sprinkle with cheese. Cover; let stand for 5 minutes or until cheese is melted.

Serve over rice. Garnish with sour cream and cilantro if desired.
Posted by Jen at 2:49 PM 1 comment:

I have been so busy this week. I've been working on Etsy orders, cleaning the house, chasing kids all over the place, cleaning the house, doing endless loads of laundry, cleaning the house, going to hockey games, and oh- did I mention cleaning the house? I've also dealt with Sophia falling out of her highchair and smacking her face on the tile, and Jonah breaking his fall with his forehead while ice skating at the hockey rink today. Good thing we're not taking Christmas pictures for a couple more weeks!

The hubby has the next two days off work, so hopefully I'll either A) get some help around here, or B) get a chance to get stuff done while he's occupying the kids. I'll take either one, really. I'm not picky.
Posted by Jen at 7:02 PM No comments: 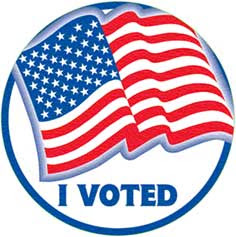 Jonah-isms v.4: The poor tree never had a chance.

We went to Raleigh, NC over the weekend for hockey. In between games, the kids got bored, so we took them outside the rink to play for a little bit. The boys found some trees with lots of pretty leaves on them, and decided to make their own fun. Here's Jonah's step-by-step instructions for breaking a limb off a tree.

Step 1. Climb out onto desired limb. 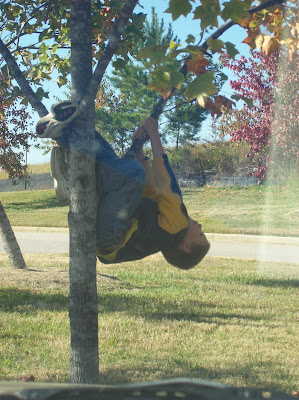 Step 3. Get help from your older brother. 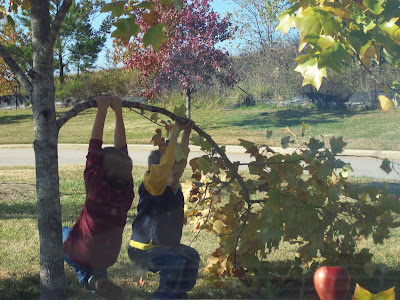 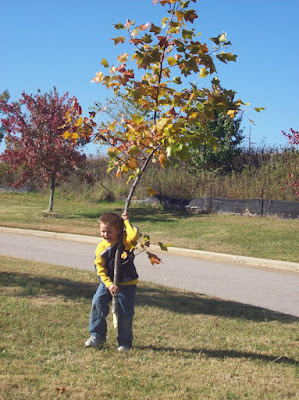 I love making the kids costumes for Halloween. Nothing beats homemade if you ask me.
Noah & Jonah both wanted to be Yoda this year. Jonah really got into character ;) 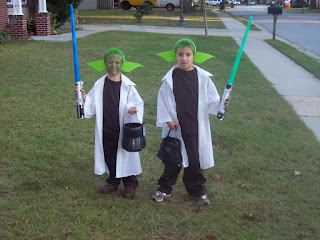 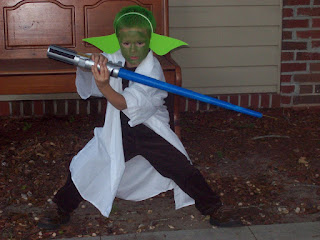 And Sophia was Tinkerbell. 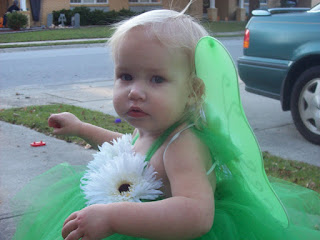 They had so much fun trick-or-treating. We went with a group of friends and the boys had a blast. Noah was absolutely fearless this year...a HUGE feat for him! Sophia was a little hesitant after the first house she walked up to had a man with a scary skeleton mask. After that, she refused to walk up to the door, and would only go if Daddy pulled her up to the door in the wagon.
Hope you all had a great time!