Almost Done with One

We are finally close to the end of the hubby's first training. One week from today and he'll be back home. For about a week. Then we'll have to say goodbye again for training numero dos.
Of course my emotions are all over the place. I'm excited and have butterflies in my stomach because we haven't seen him since 8 January...which by next Friday will be two days shy of 6 weeks. I'm so happy that my kids get their daddy back and that I get my hubby back (wink wink). But knowing that we only have him home for eight days before he has to leave again sucks. And I also have the nagging thoughts in the back of my mind that every TDY that passes is bringing us that much closer to the big goodbye in May- his deployment. God only knows how much we're dreading that one.
This will be his first deployment in 6 years. Yep...you read that right. We are so SO blessed and I don't let that fact escape me. We've been able to have Daddy home for all the big events for six years now and we got very used to that. And that fact makes this deployment that much harder. Last time hubby was deployed, Noah was 4, Jonah was almost 2 and Sophia wasn't even a glimmer in our eye. Now we have a 10 year old, an 8 year old, and a 4 year old Daddy's girl. The boys are older and more aware of what's going on in the world and that their dad's job is a dangerous one. And while Sophia doesn't understand it like the boys do, she's still having a hard time wrapping her head around it. Daddy will be deployed over her 5th birthday and to Daddy's little princess, that is the end of the world. We're planning to have a late birthday party for Jonah (who just celebrated his birthday last week, but Dad was away) and an early birthday party for Sophia in May before hubby deploys. Unfortunately he'll also miss Noah's birthday in October. We're still working out something super special for him.
The hubby and I are trying to come up with ways to make the deployment easier for them. I found an Etsy seller (Carly's Homefront) that makes photo pillows for military families. All we have to do is purchase the pillow ($10 each) and email her a picture of hubby in his uniform and she will make a Daddy pillow. This is going to be a HUGE help for the kids. Every night they'll be able to hug "Daddy" and see his face. Talk about reassurance for little minds. We also decided to get the kids each their own Survival Bracelet. These are all over the place now and I've seen many a military member wearing them since I've became a military wife almost 11 years ago. They're a simple strand of paracord woven into a bracelet, but with one strategic pull they come apart and the paracord is available for use. Now of course I don't intend to have my kids in any type of situation that will warrant the pulling apart of the bracelet, but we thought it would be a good tool to help them "survive" the deployment. Any time they look at the cord on their wrist they'll remember that they're just as strong as their daddy and they'll get through this too. And earlier this week I recieved an email from MyAirForceLife.com and it had this link to a new website developed for kids whose parents are deployed. It's called Military Kids Connect. There are all kinds of resources for kids (ages 6-17) and parents too. I signed the boys up for it and will definitely make it a regular computer-time stop for them.
And then there's trying to help us stay connected with each other. We'll write letters and emails and I'll mail him care packages. We'll have some chances to Skype and email and talk on the phone, but they will most likely be few and far between due to the nature of the hubby's job. I cannot go into detail but basically he won't have access to computers/phones/etc much of his deployment. While he's been away at training we have decided to "challenge" each other. We're doing a monthly challenge up until he deploys, where we each set a health/fitness goal for ourselves, and if we meet the goals, we reward ourselves at the end of the month with something we've been wanting to do, but haven't justified spending money on. Then, when he gets deployed we are going to set a long-term goal for ourselves, and keep each other accountable with emails/phone calls as often as possible throughout the 6-9 mos he's away. If we can achieve the "Big Goal", we will have a bigger, joint reward upon his return. We haven't nailed it down yet but we're thinking that a weekend away just the two of us will be just what we'll be needing after almost a year apart.
It's not going to be a piece of cake, and I'm sure I'm going to complain and be pissed at the military at least once while he's gone, but I will do the very best I can to be a supportive wife and a good mom (and dad) to our children back here at home. Because really, the best thing I can do for him is to keep the homefires burning and assure him that we will be okay.
Posted by Jen at 9:21 PM No comments:

This is another one from Pinterest.com that I saw and HAD to try. Some friends came over to watch the Super Bowl last night so I decided that it was the perfect opportunity to test it out. It was such a huge hit that I didn't even get a chance to take a picture before the dish was empty! It's DEFINITELY going to be a regular appetizer at our get togethers from now on!

1. Preheat oven to 350*. Mix the cream cheese, sour cream, mayo, mozzarella and Parmesan together and spread it as evenly as possible on the bottom of a baking dish/pie plate.
2. Spread the pizza sauce on top and sprinkle with the remaining mozzarella and Parmesan cheeses. Top with your favorite pizza toppings.
3. Bake for 20 minutes or until the cheese is melted and bubbly. Serve hot.
Posted by Jen at 1:08 PM No comments: 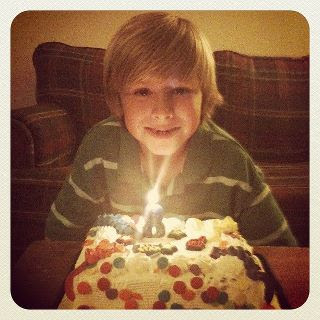 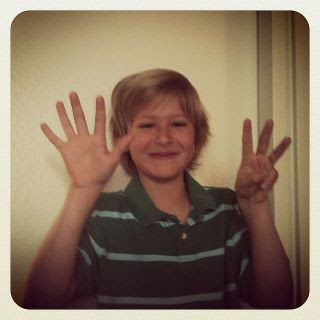 My little man turns eight today. I found some old picture of him last week and it made me laugh and want to cry all at the same time. I can't believe it's been EIGHT years since he came into our lives. He's a handful to be sure, but he is just so goofy that we can't stay mad at him for too long.
He got a surprise before-school phone call from Dad (who is still away for pre-deployment training) and I think that was better than any present he could open. The smile on his face when he heard his voice was the best I've seen in awhile.
I sent him off to school with some cupcakes to share and then after school and his big brother's volleyball game, we're going to come home and celebrate with pizza and ice cream cake.
We are so blessed to have this crazy, passionate, and goofy boy in our family! We love you Jonah-man!
~Love Momma, Daddy, Noah & Sophia
Posted by Jen at 10:52 AM No comments: